Who is George Rodrigue?

Before Rodrigue painted the first Blue Dog back in 1984, his work focused on his homeland of Louisiana. He began painting Louisiana landscapes, it’s people and traditions in the late 1960s.  He was afraid Louisiana’s heritage was dying, which is why he felt an urge to capture it in his work.

In his own words, the goal of the paintings was to “graphically interpret the Cajun culture, preserving it in the face of a progressive world.” 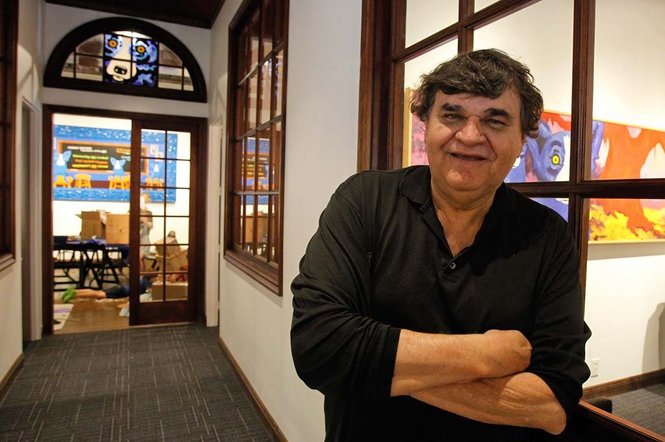 Despite not getting much attention in Louisiana yet, Rodrigue built a reputation in the rest of the nation by the mid-1980s. This led to several opportunities that made him a pop-art icon:

Rodrigue’s paintings of US presidents

The publication of Rodrigue´s 1976 book “The Cajuns of George Rodrigue” was recognized by the National Endowment for the Arts. This led to first Lady Rosalyn Carter noticing the book and giving it as an official Gift of State during President Jimmy Carter’s administration.

A couple of years after painting George Bush, Rodrigue was invited to meet Hillary and Bill Clinton in the white house. He got the invitation from a friend who was connected to the Democratic party. He built a relationship with them and was commissioned by the Democratic Party to paint president Bill Clinton and Vice President Al Gore three years later.

Despite having worked for both the Republican and Democratic party, Rodrigue stated that he doesn’t align himself with a political party. 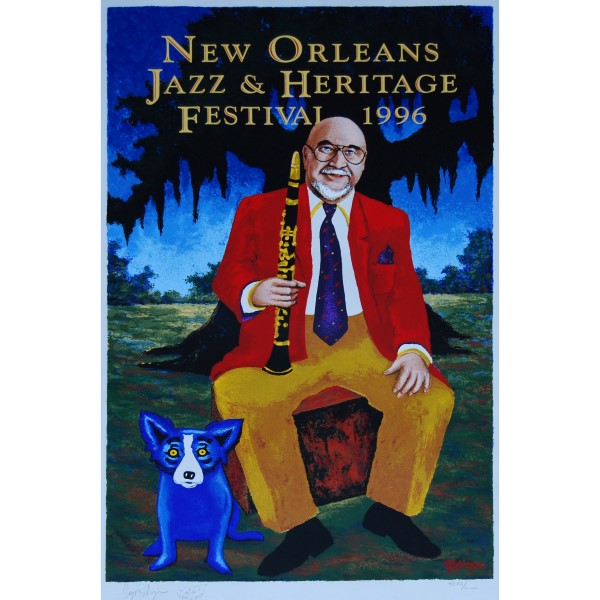 In the same year Rodrigue was invited to the white house (1994) he was also asked by Procreations, the company that made the posters for the Jazz & Heritage Festival, to make that year’s poster. The organization insisted on having the Blue Dog included, which Rodrigue felt hesitant about at first.

They ended up making a compromise by not making the Blue Dog the central point of the poster. That year’s edition went on to be one of the most successful in the festival’s history:  it was sold out before the end of the second week.

The most profitable events in Rodrigue’s life were his contributions to the advertising campaigns of two well-known brands. He was employed by Michel Roux of Absolut Vodka to paint Absolut Louisiana and Absolut Rodrigue in 1992. Rodrigue stated that his motivation to work with Absolut Vodka was not because he wanted to promote alcohol. He said that he found the opportunity to synthesize art and advertising too good to pass up on. Because the paintings for Absolut were published in USA Today, it brought him nationwide exposure.

In the year 2000, Rodrigue worked on the advertising campaign for Xerox Color Inkjet Printers. 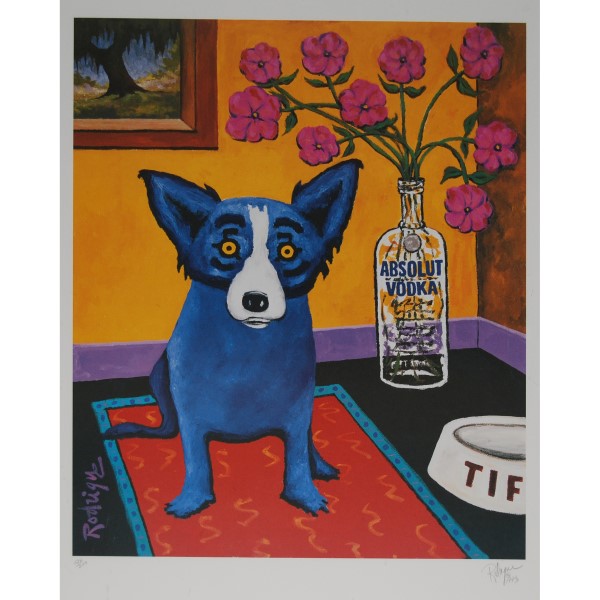 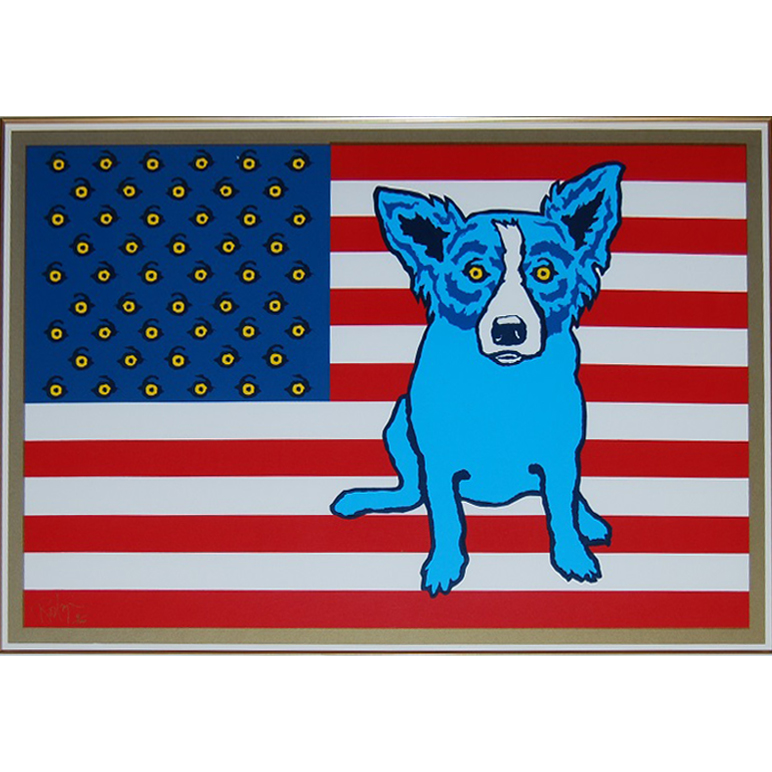 Rodrigue made noticeable contributions to education, art and society. He felt strongly about getting youth involved with visual art. It is for that reason he founded the George Rodrigue Foundation of the Arts (GRFA). The goal of the organization is to spark creativity in children, who otherwise wouldn’t get the chance to follow an art education.

In 2001 the prints of his “God Bless America” Blue Dog painting raised over $500.000 for the Red Cross.  When Hurricane Katrina hit in 2005 After Katrina hits New Orleans, the prints of We Will Rise Again, raised over $2 million for recovery. The prints were also used to help schools that were affected by Hurricane Harvey. According to George´s son Jacque it raised about $500,000 for storm and flood relief.

Rodrigue’s death and the value of his work

Rodrigue died at age 69 on 14 December 2013. His death was caused by lung cancer that was diagnosed back in 2012. George believed his condition was caused by a studio he worked at early in his career, which didn’t have the proper ventilation to deal with toxic fumes. George left behind a wife, Wendy, and two sons, Jacque and Andre. It was later revealed that the value of Rodrigue’s works increased after his death. This was stated by Rachel Weathers, the director of paintings and photography for The Neal Auction Company of New Orleans.

In April 2015, Rodrigue’s Blue Dog painting “Chairman of the Board” was sold for a record-breaking $173.275. This was more than twice than what The Neal Company originally had the painting valued at. It reached this record breaking price because five collectors had a bidding war over the painting, after which it went to a California collector. 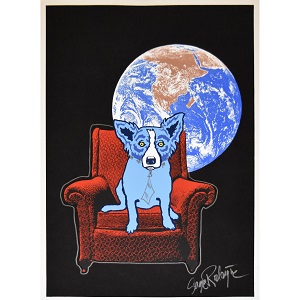 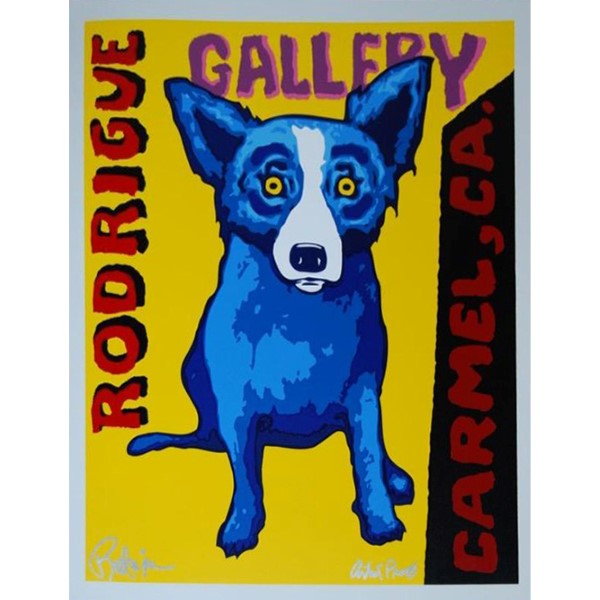 The city of New Orleans has stated that it takes great pride in being Rodrigue’s birthplace. Lousiana Gov. Bobby Jindal mentioned Rodrigue was one of Louisiana’s favorite sons.

“His work as an artist is iconic and uniquely Louisiana. George’s Blue Dog not only became symbolic of his work, but it became a symbol for Louisiana.”

This earned him the ability to paint the likes of world leaders including Ronald Reagan, George H.W. Bush, and Bill Clinton. His work made him an ambassador for our state and a renowned artist, but he never forgot his Louisiana roots. Indeed, there are countless stories and examples of his charity work to help the people of Louisiana.

Without question, his paintings will live on, but his legacy will be much more than paint on a canvas Rodrigue’s art can be found in the homes of fine art collectors, art galleries, museums and hotels like the Sheraton New Orleans. There are a total of three George Rodrigue studios located in New Orleans, Lafayette and Carmel.

We make buying George Rodrigue Blue Dog art online as safe and convenient as possible. Everyone in our network is a verified Rodrigue seller. This means all the Blue Dog Originals and Prints have been checked for authenticity. When you make a purchase, the piece is shipped to your location fully insured, with a COA (certificate of authenticity) and our return policy protects you against any condition discrepancies. This is why we have sold hundreds of Rodrigue’s artwork to collectors from all over the world.
Menu
Phone: (323) 366-0039
[email protected]
New Orleans, LA
New Jersey
New York
Miami
Terms of Service – Privacy Policy